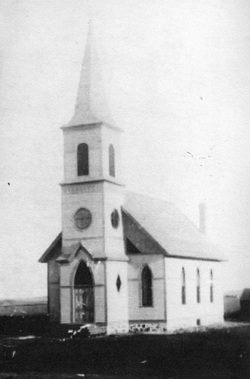 The following is a translation of a brief history of the early years of our congregation, found in a "History of the Minnesota Synod," published in the year 1909.

The small group of Christians which had settled here at that time consisted of the following families:

He did come and he preached three or four times.  After that services were conducted by Pastor W. Vollmer of Goodhue from 1881 to 1882 and then by Pastor Kittel from 1882 to 1883. From 1883 to 1886 the preaching was done by Pastors O. Hoyer and A. Hoyer. Pastor O. Hoyer looked upon Dexter
Township as his own mission field.   When he was unable to conduct services personally, he would send in his place a student from New Ulm. The following students proclaimed God’s Word here  between 1883 to 1886:  Baur, Leubbert, Poethke, Fettinger,
Feldmann, Burkholz, Haar, Fritzke and Hupfer. On December 3, 1883, a meeting was held for the purpose of organizing an Evangelical Lutheran
congregation.  The congregation chose the name Trinity Evangelical Lutheran Congregation of  Dexter Township, Mower County,  Minnesota. The first trustees were Conrad Christgau, Johann Christgau and W. Jacobi.  The first property, an acre of land, was obtained from Houston Hay. This was later laid out in lots for a cemetery.

On June 14, 1886, the congregation adopted an Order of Service.  F. Christgau served as chairman of the meeting. The Order of Service was
written by Pastor O. Hoyer. From then on services were conducted with regularity, inasmuch as the Minnesota Synod sent a preacher every
three weeks.  A resolution adopted on may 7, 1887, was carried out by erecting a parsonage on a piece of ground that was given by the widow of Conrad

Christgau. In order to become a member of the honorable Minnesota Synod the congregation sent delegates to the Synod Convention  of 1881, which was held at Mankato.  In 1891 the congregation built a beautiful church  building. Previously the services were conducted in the district schoolhouse across from the parsonage.  The congregation erected its own schoolhouse in the year 1898.